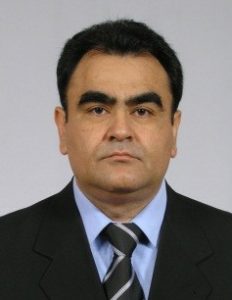 Alisher Rakhmanov Hudayberdievich, born September 30, 1956 He began his career in 1976 with the work of the City physiotherapy clinic. In 1974 he went to study in the sump. In 1980-1987 worked as assistant chair of pharmacology and clinical pharmacology Sampo. Since 1987 he has been working in Tashkent Medical Academy, in 2013. He is the head of the Division of farmaco-toxicological researches.
In 1989 he defended his thesis for the degree of Candidate of Medical Sciences, in 1999, received his doctorate in medical sciences for the protection of the thesis entitled “Status and correction of pharmacodynamics and pharmacokinetics of drugs in acute hepatitis in the prepubertal period.” During the period of scientific activity has published 121 scientific papers, including 55 journal articles, participated in 66 conferences and congresses, including foreign and international participation. Together with co-workers developed 5 new inventions in the field of pharmacology and has 5 patents.
Actively involved in the education of young scientists, helping them to master as new methodological developments, as well as conventional. 2 is the head master and two doctoral theses. Guidelines have been prepared, which describes a method of treatment of acute viral hepatitis in children with a new hepatoprotective. He is also is head of the grant “Development of a new hepatoprotective and choleretic drug from the collection of local medicinal plants” (2015-2017).

Azimova B. J. was born in March 8, 1977. In 2004, joined the staff of the Institute of Biochemistry, Academy of Sciences of the Republic of Uzbekistan to the laboratory of biochemistry of lipids as a junior researcher. From 2005 to 2008, as a postgraduate student at the Institute of Biochemistry, Academy of Sciences of Uzbekistan, and graduated in 2008. She completed PhD thesis under supervision of academician Saatov T.S. on «Regulation of apoptosis and tumor cell proliferation by thyroxinе in experimental oncogenesis».
During her dissertation work, she mastered a number of modern techniques of biochemistry and cell biology. During her studies in graduate school and beyond, she constantly engaged to improve their academic and professional level, has established scientific contacts and cooperation with well-known scientists of the Republic and foreign countries. Frequently participated with scientific reports in the scientific forum of national and international importance.
In 2006, Azimova B.J. won a scholarship to the University of Hannover (Germany). In 2009, she won a grant a received the TWAS award in the framework doctoral program of scholarships CAS-TWAS, 3240223269, and completed the program in the center of Natural products Chengdu Institute of Biology, Chinese Academy of Sciences 2010 – 2011.
In 2012-2013, Azimova B.J. was the head of the grant FA-0-15105 «The development a method for enhancement of aromatase activity in women with hyperandrogenic syndrome by using the preparation of ecdysten, a home-made formulation».
She is the author of over 30 scientific publications.

Abduvaliyev Anvar Arslanbekovich was born September 14, 1970. He began his career in 1987 with the work Tashlak district sanitary-epidemiological station. In 1988, he went to work in Institute of Zoology, Academy of Sciences of the Republic of Uzbekistan as laboratory assistant. In 1990, he enrolled to study at the Tashkent State University, Faculty of Biology. From 1992 to 2009, he worked on the experimental plant “Nihol” National Cancer Research Center of the Ministry of Health of the Republic of Uzbekistan, in the post – Head of the information department. In 1996, he graduated Faculty of Biology of the Tashkent State University. In 2003, he received the degree of candidate of biological sciences on dissertation work on “The Impact of organometallic complexes with drug amines and their protein conjugates on the structural and functional features of immune and tumor cells.” From 2010 to 2012, he studied in doctoral Institute of Biochemistry, Academy of Sciences of Uzbekistan. Since 2013, he works as head of the Department Medical genetic researches Interuniversity Research Laboratory of Tashkent Medical Academy. Since the defending, a dissertation has published 94 scientific works, including 27 journal articles, participated in 65 conferences and congresses, including foreign and international participation. Together with co-authors developed two new methods of research: the differential staining of tumor cells with trypan blue to determine apoptosis and a method for determining an individual drug sensitivity to anticancer drugs, which are also published in the general scientific literature.
Actively involved in the education of young scientists, helping them to master as new methodological developments, as well as conventional. He is scientific adviser of two defended dissertations for the degree of Candidate of Sciences. Methodical recommendations have been prepared, which describes the modification of the method of vital staining of cells with trypan blue to determine apoptosis recommended for routine use in clinical and scientific studies. For the ongoing teaching and research activities in 2007 was awarded the academic title of senior researcher.

Babayev H.N. is born May 23, 1976. In 1993 he went to study at the Tashkent State Medical Institute for Medical-prophylactic faculty. From 2005 until 2008 he worked as an assistant at the Tashkent Medical Academy. From 2008 to 2011 was a graduate student at the Tashkent Medical Academy in the department of normal and pathological physiology, pathological anatomy, which he successfully completed in 2011. They made PhD thesis under the direction of Professor R.I. Israilov on the theme: “The morphological and morphometric changes in the placenta in pre-eclampsia.” Since 2011, he is working as an assistant at the Tashkent Medical Academy. Since 2015 is the head of the laboratory of molecular and cellular technologies with electron microscopy it seemed.
When the thesis he mastered a number of modern methods of histology and cell biology. While studying in graduate school and then he was constantly engaged in increasing their scientific and professional level, to establish scientific contacts and cooperation with well-known scientists of the republic and foreign countries. He has participated with scientific reports in the scientific forum of national and international importance.

Author of more than 20 scientific papers.