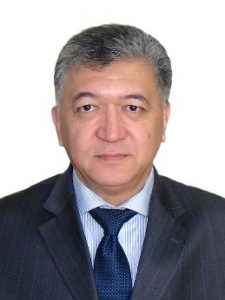 Mukhamedov Kazim Sabitovich, b. 1956 In 1979 he graduated from the medical faculty of the Tashkent Medical Institute. He completed an internship in Angren, Tashkent region, specializing in surgery. Then he worked as a surgeon in a clinic in the city of Agren. In 1982, he began working as a resident of the Department of Surgical Pulmonology at the Research Institute of Tuberculosis. In 1982 he was transferred to the department of surgery for pulmonary tuberculosis. In 1983 he entered graduate school at the Central Research Institute of Tuberculosis (Moscow). In 1987, after graduating from graduate school, he defended his thesis on the topic: “Surgical treatment of tuberculosis patients combined with non-specific lung diseases.” Since 1987, he continued to work at the UzNII Tuberculosis, first as a junior researcher, then since 1990 as a senior researcher in the department of pulmonary tuberculosis surgery. Since 2004, Associate Professor, Head of the Department of Phthisiology of the 2nd Tashkent Medical Institute. From 2005 to the present, Associate Professor of the Department of Phthisiology of the Tashkent Medical Academy, Director of the Master’s program in the specialty “Phthisiology”.
Scientific activity of Mukhamedov K.S. associated with the problem of tuberculosis. He was the head of applied grants:
1. SCST. The value of molecular genetic studies of populations of Mycobacterium tuberculosis in the epidemiology, diagnosis and treatment of patients with pulmonary tuberculosis. Contract A-9-067 (2006 – 2008).
2. SSTP. The role of mycobacterium tuberculosis populations in the development of immunomorphological features and their importance in epidemiology, optimization of early diagnosis, a differentiated approach to the complex treatment of tuberculosis and its neurological complications. Contract- IDSS-31.13 (2012 -2014)
3. SSTP. Epidemiology, diagnostics, features of the process and the effectiveness of the treatment of relapse of pulmonary tuberculosis in a large city. ATCC Contract 28.11 (2012 -2014)
4. NTP. Development of an algorithm for early diagnosis and optimization of the treatment of visceral mycoses in HIV-infected patients associated with tuberculosis. PZ – 201709 29218 (2018-2020).
K.S. Mukhamedov is the author of more than 90 scientific publications, 10 methodological recommendations, teaching aids, rationalization proposals, and takes part in international conferences.